Author(s):Ndubuisi N. Nwobodo, Paul O. Okonkwo, Samuel A. Igwe
Abstract:3-hydroxy-3-methyl glutaryl coenzyme A reductase inhibitors exhibit both in vivo and in vitro anti-plasmodial effects, independent of their hypolipidemic action. This study sought to evaluate the synergistic effect of quinine and simvastatin combination in enhancing clinical response in the treatment of malaria infection. Subjects with clinically characterized malaria (n=60) confirmed by thick blood film and immunological tests, were categorized into test and control groups after obtaining informed consent. Ethical clearance certification was obtained from UNTH Research Ethics Committee (NHREC/05/01/2008B). The quinine + simvastatin (test) group received oral quinine and simvastatin, while the quinine alone (control) group received only quinine. The subjects were followed up on days D0, D3, D7, D14 and D28 post-treatment. The assessment of clinical response was carried out in line with WHO criteria. GraphPad Prism 4.0 was employed in the analysis of data. Statistical test of significance between test and control groups determined using two-tailed Student t-test, p<0.05 considered as significant and data presented in tabular and graphical forms. A statistically significant difference (p<0.05) exists between test and control groups across the various parameters assessed. The mean early treatment failure and late treatment failure given as 7.8% and 5.9% in the test subjects were significantly decreased relative to 18.9% and 16.4% in the control. Adequate clinical and parasitological response given as 86.3% in the test group was significantly elevated relative to 64.7% in the control. The mean parasite clearance time and fever clearance time given in the test group as 3.2 days and 46.7 hours were significantly reduced relative to 6.8 days and 74.7 hours recorded in the control. The clinical clearance rate was significantly increased in the test group relative to controls. These were given as 90.5% for test subjects and 64.7% recorded in the control. The recrudescence rate of 8.0% recorded for test subjects was significantly reduced relative to 19.5% recorded for control. The enhancement in clinical response in this study is attributable to modulating influence of statin therapy. Thus, the 3-HMG-CoA reductase inhibitor, simvastatin, is a potential candidate for combinational anti-malarial chemotherapy. 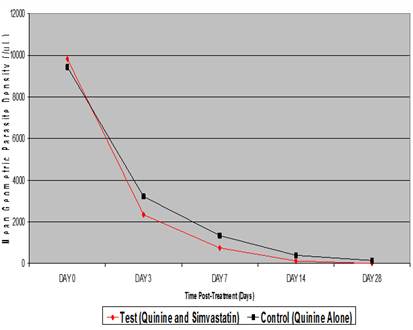