Author(s):Hamid Hussain, Archana Dhyani, Divya Juyal, Abhishek Bahuguna
Abstract:In this study ethyl cellulose facilitated microsponges were prepared by the double emulsification technique (Quasi emulsion technique) and subsequently dispersed in a carbopol gel base for controlled delivery of diclofenac sodium to the skin. The microsponges formulations were prepared by quasi-emulsion solvent diffusion method employing ethyl cellulose as a polymer. The compatibility of the drug with formulation components was established by Fourier Transform Infra-Red (FTIR) spectroscopy. The surface morphology, particle size, production yield, and drug entrapment efficiency of microsponges were examined. Shape and surface morphology of the microsponges were examined using scanning electron microscopy. Particle size of prepared microsponges was observed in the range of 28.7 ± 1.02- 23.9 ± 1.19 μm. Scanning electron microscopy revealed the porous, spherical nature of the microsponges. SEM photographs revealed the spherical nature of the microsponges in all variations; however, at higher ratios, drug crystals were observed on the microsponge surface. Increase in the drug/polymer ratio (1:1 to 1:10) increased their yield (10.85 ± 1.60 to 41.03 ± 1.26), average particle size of all formulations ranges from 28.7 µm to 45.9 µm which is in increasing order due to the increase in the concentration of polymer but after certain concentration it was observed that as the ratio of drug to polymer was increased, the particle size decreased, The pH of the gel was determined having average pH of 7.3 ± 0.4, The viscosity of the formulation was analysed by Brookfield viscometer with maximum reading of 2874 and minimum reading of 2345 cps, the drug content of different formulations was found in the range 19.07 ± 2.21 to 33.09 ±2.27, the spredibility of gel containing microsponges revealed in the range of 13.6 ± 0.89 to 13.6 ±0.91 showing good characteristics of spreading, the cumulative release of the formulations are in the range of 89.83% to 13.25%. 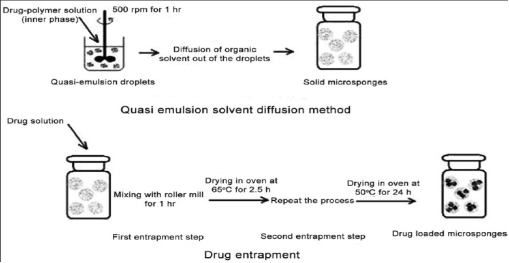