Statin use enhances parasitological response to quinine against falciparum malaria

Author(s):Ndubuisi N. Nwobodo, Paul O. Okonkwo, Samuel A. Igwe
Abstract:Antimalarial drug resistance to quinine may result from either changes in drug accumulation or efflux leading to reduced intra-parasitic concentrations of the drug. The study examines the effects of simvastatin in modulating parasitological response to quinine. Subjects with clinically characterized malaria (n=60) confirmed by thick blood film and immunological tests, were categorized into test and control groups after obtaining informed consent. Ethical clearance certification was obtained from the University of Nigeria Teaching Hospital Research Ethics Committee (NHREC/05/01/2008B). The test (quinine + simvastatin) group received oral quinine and simvastatin, while the control (quinine alone) group received only quinine. The subjects were followed up on days D0, D3, D7, D14 and D28 post-treatment. The assessment of clinical response was carried out in line with WHO criteria. GraphPad Prism 4.0 was employed in the analysis of data. Statistical test of significance between test and control groups determined using two-tailed Student t-test, p<0.05 considered as significant and data presented in tabular and graphical forms. A statistically significant difference in parasitological response was reported between test and control groups (*p<0.05). The value of low level resistance, RI was given as 2.4±0.17%, mid-level resistance RII as 3.9±0.25%, high level parasitological resistance, RIII as 3.1±0.26% and the late parasitological failure (LPF) as 3.7±0.46% in the test group. The consideration of LPF alongside gives an overall parasitological resistance of 13.1±0.88% in the test group. This contrasts with the value of RI given as 12.2±0.56%, RII as 13.7±0.48%, RIII as 4.9±0.18% and the LPF given as 4.5.6±0.16% in the control group. Again, the consideration of LPF alongside gives an overall parasitological resistance of 35.3±01.4% in the control group. The outcome of present study lends credence to the potential role of 3-HMG-CoA reductase inhibitor, simvastatin, in combination with quinine in modulating parasitological response in the treatment of malaria. 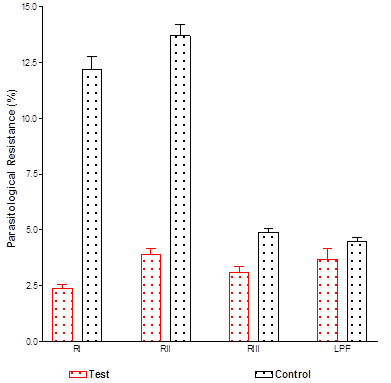